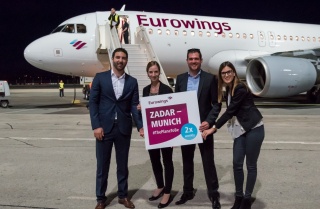 German low cost air carrier Eurowings will fly from Germany to Zadar instead of Split during the following two weeks.

The reason is the reconstruction of runway at Split Airport. Eurowings will divert its four Split routes to Zadar starting from February 17th until March 1st. Air tickets for flights from Dusseldorf, Cologne, Munich and Stuttgart to Zadar are offered on www.eurowings.com